The crowds came in their thousands, 39,115 to be precise, to see how events would unfold on the Field of Legends as Tipperary and, the current Liam MacCarthy holders, Limerick went toe to toe in the last round of the Munster Senior Hurling Championship round robin series. And it was the Premier men who prevailed making it win number four on the trot with a 1-22 to 0-21 defeat of their neighbours.

Tipperary were focused, lively and sharp again and though severely tested following the retirement through injury of Cathal Barrett and Patrick Maher, the team fought with great resilience and unity. This win confirmed their place in the provincial decider on Sunday week in the LIT Gaelic Grounds where they will once more come up against the Treaty men.

Congratulations to Seamus Callanan (Drom & Inch) as he has named the Bord Gais Energy man of the match award following his wonderful display in which he scored 1-4 from play. Seamus was presented with his award by Sorcha Fennell Sheehan, sponsorship manager for Bord Gais Energy. 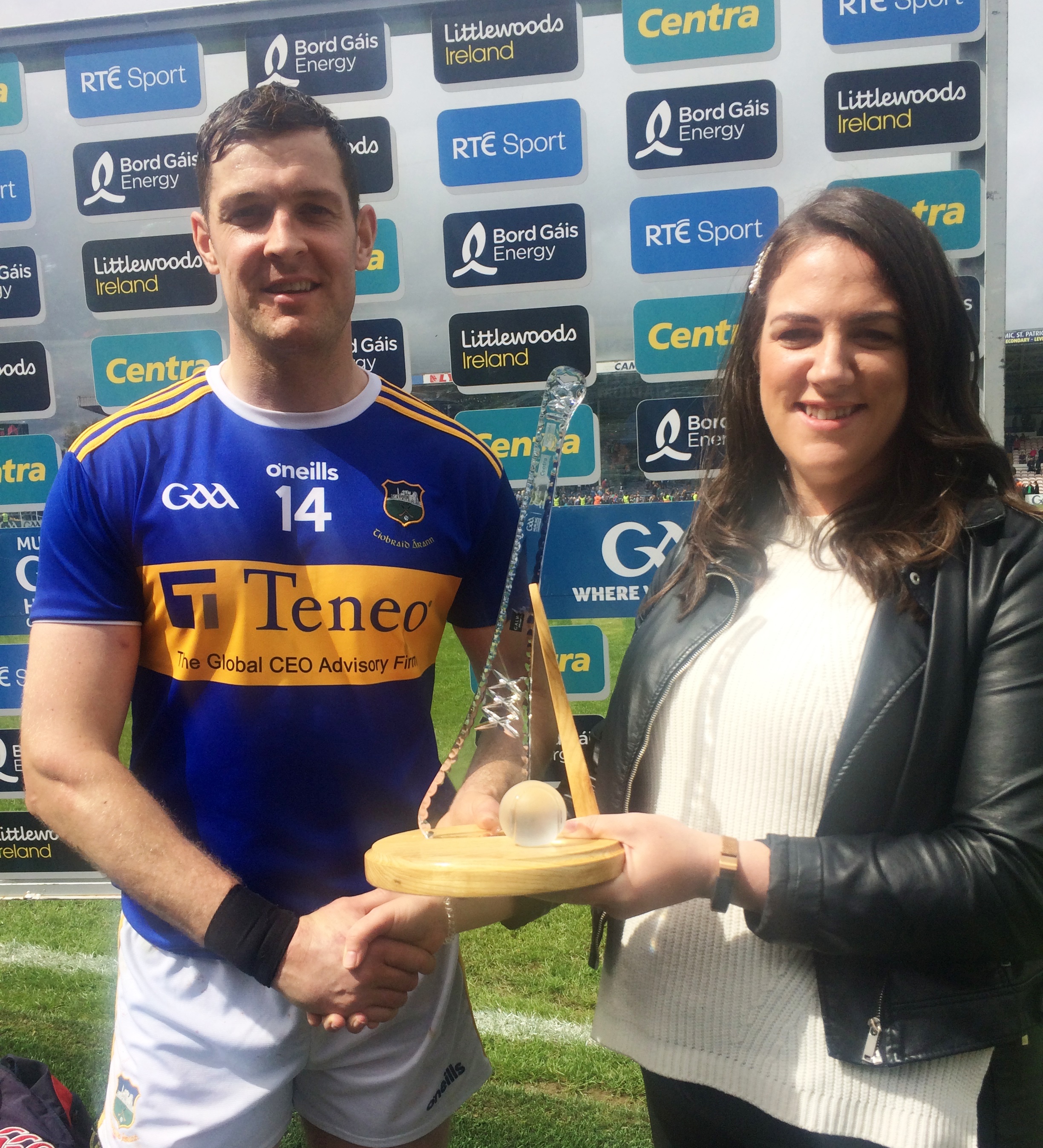 As mentioned already Cathal Barrett and Patrick Maher saw their involvement come to a halt in the first half. Patrick’s injury has been confirmed as a rupture of the anterior cruciate ligament in his knee. Cathal will undergo a scan on Tuesday evening and details of his injury will be known later. We send best wishes for a speedy recovery to both players following their respective injuries.

Jake Morris (Nenagh Éire Óg) made his full debut, having been introduced in previous championship action from the bench.

The focus now turns towards Sunday week for what will be a highly anticipated Munster Final. Stand tickets will be available through clubs, while terrace tickets only will go on sale from this Wednesday, June 19th on tickets.ie and through selected SuperValu and Centra stores.

Tipperary’s involvement in the Electric Ireland Munster Minor Hurling Championship came to an end last Sunday following a 3-24 to 1-15 defeat to Limerick. Kyle Shelly (Moycarkey-Borris) was Tipp’s goal scorer following his introduction in the second half.

Commiserations to the full panel and management team of Paul Collins, Shane McGrath, Tony Shelly, Ger Ryan and all the backroom team who put in a tremendous effort in preparation for and during the campaign. With some of the panel still young enough for next year, hopefully the experience gained this year will stand to them greatly when the 2020 championship comes around.

The Tipperary U20 football team recorded two wins in the Andrew Corden Cup last week. The first was against Carlow at home and then they had a narrow win away to Wexford last Saturday. Unfortunately, the loss to Laois in round 2 meant that the Leinster side, by merit of their 4 wins, were winners of the tournament.

Tipperary’s first match in the EirGrid U20 Munster Championship will be on Tuesday July 2nd in a quarter final clash against Limerick in Semple Stadium at 7pm.

Should Tipperary progress they will meet Kerry in the semi-final on July 11thalso in Semple Stadium.

Best wishes and a speedy recovery to Tipperary senior camogie player Nicole Walsh who sustained a bad concussion in the Liberty Insurance All-Ireland Senior Camogie Championship match against Waterford last Saturday. The match was abandoned and will be refixed for a later date.

In the Liberty Insurance All-Ireland Intermediate Camogie Championship Tipperary drew 2-14 apiece with Down.

Congratulations to the Tipperary intermediate Ladies Gaelic football team following their victory in the TG4 Munster Intermediate Ladies Football Championship Final. They had thirteen points to spare in a 0-20 to 1-4 defeat of Clare on Sunday last.

Best wishes to Derek O’Mahoney (Ardfinnan) as he takes charge of the Longford and Tyrone Football All-Ireland Senior Championship Round 2 in Glennon Bros Pearse Park on Saturday next, June 22nd.

The Bank of Ireland Celtic Challenge campaign came to an end for Tipperary Gold (West and South Tipperary) last Saturday afternoon in Golden. The side exit the competition after an extra time loss to North Cork in the Corn Michael Hogan Quarter Final on a score-line of North Cork 5-15 Tipperary Gold 1-25.

For the second year running, Tipperary claimed the 2019 Munster Under 16 Poc Fada event. Pat Ryan (Upperchurch-Drombane) won the title in Kerryhead Mountain Ballyheigue, Co. Kerry last weekend. Congratulations to Pat who will now go forward to contest the All-Ireland Poc Fada on the Cooley Mountains at a later date.

The John West Féile na nGael 40×20 2019 was hosted by Cork & Limerick and huge congratulations to the Lahorna team of Hannah Grace, Leanne Gould, Christine Percy, Lucy Gould and Katie Mulcahy who made history by being the first ever Lahorna team to win the Division 1 40 x 20 Féile. All pictured below with coach Vincent O’Shea. 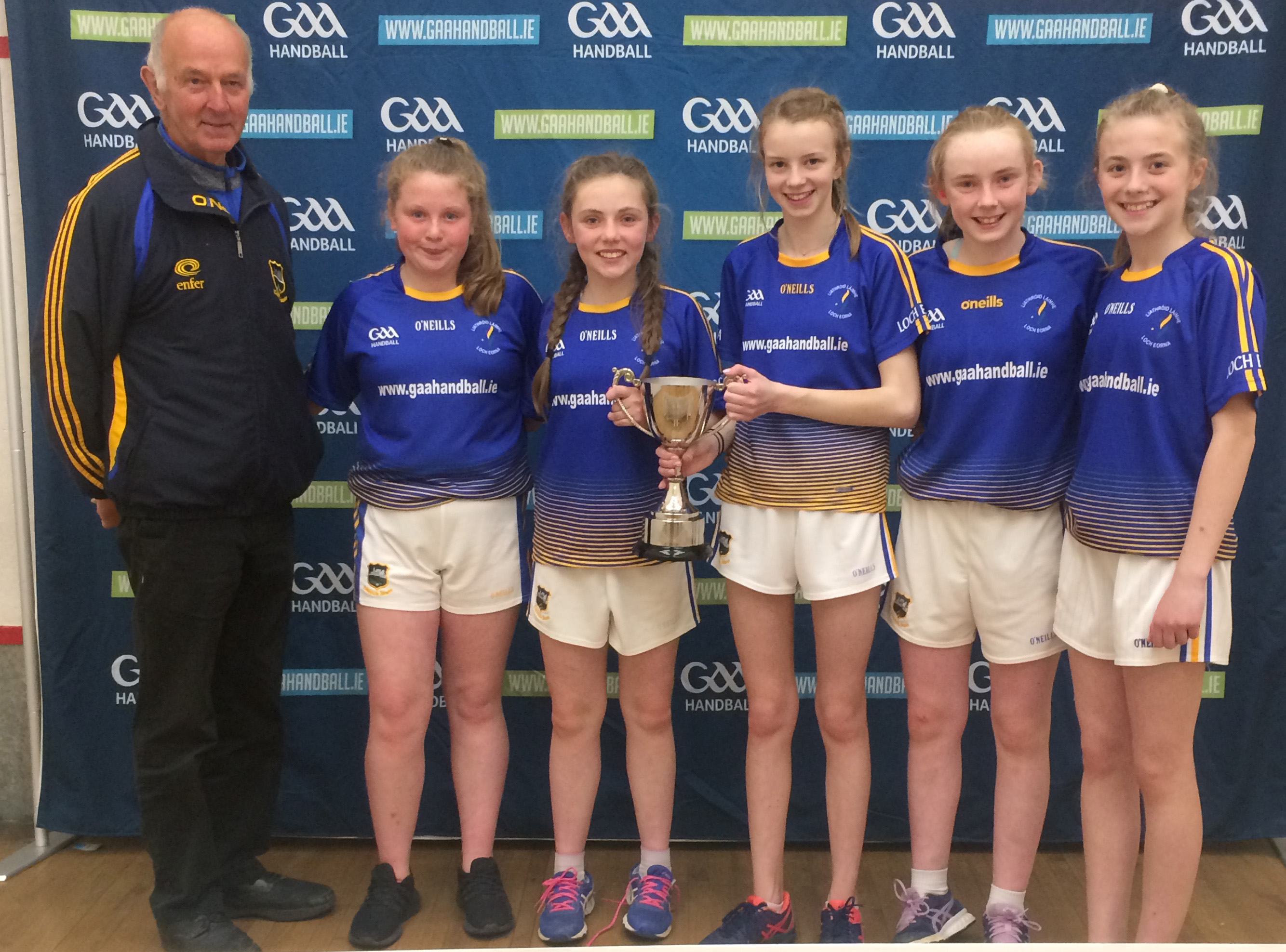 This was no easy task for the Lahorna girls as Garryhill, Cullohill and Kilkishen were also eager to bring home the Division 1 40×20 Cup from Fermoy in Co. Cork.

The competition ran in a round robin format, first to 21 aces or the highest score wins after 15 minutes. In the first game the Lahorna girls came up against Kilkishen, Co. Clare who were also their opponents again in the final. Hannah and Lucy drew their first game 19-19, Leanne and Christine defeated the second Kilkishen pair 21-4 to give Lahorna their first win of the day.

Up next in round 2 was Cullohill, Co. Laois. This time Hannah and Katie lined out in the first game winning 21-3 and Leanne and Christine won the second game 21-2 which gave us a convincing win.

The girls final group game was against the Co. Carlow club of Garryhill. Hannah and Katie again were first into the court and had a tough battle but came out on top of a score line 16-15. Christine and Lucy put in a stellar performance to book our place in the final on a score line of 21-4.

The final was a tense affair from start to finish where the girls found themselves battling it out with Kilkishen yet again. Hannah and Lucy saved their best performance until last, rattling the same Clare opponents that they met in the first round by winning 21-8. Christine and Leanne teamed up for the final game of the day against the second Kilkishen pair who they too also met in the first round and after a hard fought close affair the Lahorna pair came out on top winning 16-15 which secured our Lahorna girls the Féile Divison 1 crown for 2019 on a final score line 37-23.

The icing on the cake in Fermoy was victory for Lahorna in the Division 1 skills competition when Hannah Grace emerged victorious to take the individual gold and title of the Féile skills champion 2019.

None of this would have been possible without the dedication from their coach Vincent O’Shea who has but in endless hours over the last month preparing the Féile teams in their quest for glory.

Lahorna had a second girls’ team, pictured below, who won Division 3 in Cappagh Co. Limerick. This is the first time these girls played in the Féile competition. This was a super achievement for a very young team of players including Ali O’Kelly, Clodagh Shinners, Emma Williams, Sarah Williams and Aoife Williams. Ali O’Kelly went on to compete in the skills competition where she won a silver medal. Congratulations to both teams. 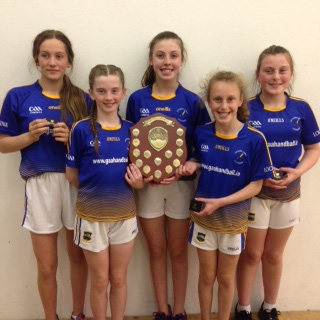 The 60×30 Championships start this week at various venues commencing with men’s junior singles and doubles action.

Best wishes to all schools taking part in the Allianz Cumann na mBunscol finals this Tuesday and Wednesday, June 18/19. Year on year this event goes from strength to strength and is thanks to the enormous efforts and dedication of so many including the Cumann na mBunscol committee and teachers of all primary schools across the county.

Action continues this weekend mainly in round 7 of the Tipperary Water County Hurling Leagues. For results of all games and forthcoming fixtures please check https://tipperary.gaa.ie/fixtures-results/

It has been confirmed that the rescheduled date for this event is September 14th in Newport and as soon as information becomes available it will be forwarded to all clubs in the county.

Children are coached in hurling, camogie, football and ladies’ football and some camps offer rounders, handball and fun & run. The week-long Kellogg’s GAA Cúl Camps are priced at €60, dropping to €55 for a second child and just €45 or a third and any additional children.

Everyone who registers for a Kellogg’s GAA Cúl Camp can enter a competition for a chance to win €5,000 worth of training gear for their team and a €500 voucher for themselves by entering the code from promotional packs of Kellogg’s Corn Flakes or Rice Krispies in store from April or answering a question online. Register online now – gaa.ie/kelloggsculcamps

Ahead of Tipp’s Munster Senior Hurling Championship Final appearance against Limerick on Sunday week, June 30th, supporters can join the Tipperary Supporters Club at www.tippsupportersclub.com or by calling Jim Reidy, Membership Officer on 086 3580718.

All members are entered into a prize draw for championship match tickets for all Tipperary Senior games.
A specially designed Tipperary Supporters Club pen with stylus for use on touch-screen devices
2019 Car Sticker
Text alerts for all Championship team news
Regular news to your email about all the latest in Tipperary GAA circles.