The Runner – The Masochist

1. gratification gained from pain, deprivation, degradation, etc., inflicted or imposed
on oneself, either as a result of one’s own actions or the actions of others, esp. the
tendency to seek this form of gratification.

2.
The act of turning one’s destructive tendencies inward or upon oneself.

How do you define someone who runs in solitude? What kind of pleasure must they get from this seemingly needless, pointless, aimless hobby? Why would they submit themselves to such arduous tasks?

It’s 6:30am. The darkness still appears to be in its prime. The warmth, comfort and security of bed, makes the idea of getting up almost impossible. The runner, shuns these pleasures, and instead chooses to get up. They get primed, hydrated and insulated. Armed with reflective jackets, they leave their humble abodes and take to to the roads, seeking some kind of self gratification. To others, these habits are grotesque. Others might consider, one day, I might do that, but inevitably find reasons not to.

It’s 7am, and the runner has left his home. The initial shock of the cold air rasping against his lungs, the pain of each breath taken in, makes the runner themselves, contemplate their decision to abandon their warm caring beds. Knowing that they are now too far gone to turn back, they continue.

The darkness heightens their sense of awareness of their surroundings, conscious that these roads possess various dangers. The runner is fully aware that at any moment, a car could speed along the road, caring not for the helpless runner out on their morning jog. Regardless, they continue.

After 10 minutes, their muscles begin to loosen up. The runner, still struggling with their breathing due to the harsh, unforgiving cold air, begins to find their rhythm. Each step feels easier than the last. The runner reassures themselves that their sacrifice will eventually pay dividends. There will arise an opportunity where they can showcase their new found fitness. Satisfied that the ends will justify the means, they struggle on.

Half an hour has passed, and the runner is halfway through their routine. Conscious that their pace must result in at least 10k during their hour of torture, they pick up the pace. It’s easier now; they have become acclimatised to their surroundings. The crusty rime of frost now begins to glisten on the road as the dawn begins to emerge. They comfort themselves now, knowing by the time most people are pressing snooze for the first time, they will have an intense workout completed.x

On the run home, the runner’s mind is at ease. They can pass their neighbours homes, noticing that lights are slowly beginning to be turned on. As the idle are wiping the sleep from their eyes, the runner is wiping the sweat from their brow.

Each step is slowly being accompanied by a jolt of pain. The lactic acid has begun to take hold. This is the challenge the runner has been waiting for. Determined not to succumb to the pain, they push themselves harder. The pace has been increased from a brisk trot, to a spritely canter. The pain intensifies with each step. This separates the men from the boys. They are now entering the final few turns which lead to their home. The canter suddenly becomes a gallop. The pain is now excruciating. They drive for the finish. This last gasp effort will be worth it; at least that’s what they keep telling themselves. This is what separates the men from the boys. The small hill leading to their front gate suddenly becomes their Everest. As the gag reflex tries to take hold, the finish line is in sight, one final effort and the goal will be achieved. With all their energy which is left, a final intake of air is breathed in and the aching muscles are asked to put in one final effort. The finish line draws ever closer and just as their energy expires, they have completed their goal. A few minutes are taken to assess their achievement. Once done, a sudden sense of satisfaction is realized. They had pushed their bodies to the limit and were satisfied. 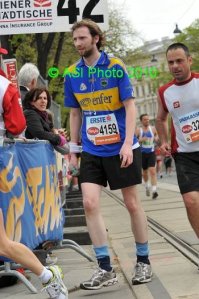 Many question their merits. What point to this numb self sacrifice? The athletics world is filled with many talented athletes, so their chances of winning a race are extremely limited. They do it because they know they can. They can push their bodies to their limit, feel the burning ache of cramp, and push on regardless. They compete in races, not for the winning or losing, but for the chance to compete on a platform against likeminded, like willed people.

How can one describe this kind of sport? Awards may not be won, people may not even remember or acknowledge the sacrifices they have made, unlike those who compete in many team sports. They push themselves through agony to prove to themselves that they can push themselves to the edge. For this reason, they are masochists.

The definition holds true, “gratification gained from pain, deprivation, degradation, etc., inflicted  or imposed on oneself, either as a result of one’s   own actions or the actions of others, esp. the
tendency to seek this form of gratification”