by Ger Ryan
in GAA
1

The much-anticipated siege of Ennis never lived up to expectations as Tipperary danced smoothly and efficiently through the lines to make it win number three in the Munster Senior Hurling Championship following their 3-21 to 0-17 defeat of Clare last Sunday. Goals from Noel McGrath (Loughmore-Castleiney), Seamus Callanan (Drom and Inch) and Patrick Maher (Lorrha-Dorrha) ensured victory went to the Premier County. In scoring Tipp’s second goal, Seamus Callanan moved into top spot as Tipp’s all-time championship goal scorer as he hit goal number 30 on Sunday.

Once again there were several Tipperary players in contention for the man of the match award, but it was John McGrath (Loughmore-Castleiney) who got the nod and John was presented with his award by Sorcha Fennell Sheehan, sponsorship manager for Bord Gais Energy, pictured below.

Sunday’s clean sheet for Brian Hogan (Lorrha-Dorrha), his second of the campaign, was Tipp’s first clean sheet against Clare since the 2008 Munster Final when Brendan Cummins (Ballybacon-Grange) was between the posts. Brian’s dad, Ken, had a clean sheet in the ’87 Munster semi-final replay in Killarney when Tipp won 4-17 to 0-8 on June 21st of that year.

Sunday’s win has ensured Tipp will be at least in the last eight of the All-Ireland championship with the prospect of a Munster final appearance also very real.

Tipp’s final round match is on Sunday week, 16th June against Limerick in Semple Stadium which has a 2pm throw-in.

On Sunday next, 9th June, Tipperary will take to the field in Páirc Esler, Newry to take on Down in the first round of the All-Ireland football qualifiers. The last time both sides met in the qualifiers was back in 2012 when Down held the upper hand winning 1-13 to 0-11 in Mullingar.

Manager Liam Kearns and his squad will be determined to bounce back from the recent loss to Limerick in the Munster Championship and will relish the task ahead of them on Sunday.

We send best wishes to the side and hope as many as possible will make the trip to Newry in support of the team. Throw-in is at 2pm and the referee will be Fergal Kelly (An Longfort).

The Tipperary minors with a below par performance succumbed to their second loss of the championship when going down 2-13 to 1-9 to Clare in Round 3 of the Electric Ireland Munster Minor Hurling Championship last Sunday. Kyle Shelly (Moycarkey-Borris) was the Tipp goal scorer.

They will play their final round match against Limerick on Sunday week when the Treaty lads arrive in Semple Stadium for a 12noon showdown.

Tipperary contested 2 games in the Andrew Corden Cup last week, winning against Waterford on Wednesday and going down to Laois on Saturday. They have a bye this weekend and the next game will be at home on Wednesday week, 12 June in Round 4 against Carlow with the last match away to Wexford on Saturday 15 June 2019 in Round 5 in Bellefield, Enniscorthy at 1pm.

Tipperary’s first match in the EirGrid U20 Munster Championship will be on Tuesday 2 July in a quarter final clash against Limerick in Semple Stadium at 7pm.

In the Bank of Ireland Celtic Challenge, following a week off last week Tipperary Gold (West and South Tipperary) resume their campaign with their final group stage game against East Cork this Wednesday 5th June in the Bride Rovers grounds Rathcormac at 7:30pm

In Group A, Tipperary Blue (North and Mid Tipperary) will play Limerick Treaty in St. Patrick’s GAA Club in Round 5, also on Wednesday night at 7:30pm.

Best of luck to both panels in this week’s fixtures.

Tipperary Poc Fada takes place this Thursday June 6th, in Bike Park Ireland, Knockshegowna. Registration will be at 6:30pm and the event will start at 7pm. The senior event is open to all and applications for the senior event can be made by email to [email protected] or [email protected] The U16 Event is through divisional qualification at Bord na nÓg level.

There are twenty-six games pencilled in this week in the Tipperary Water County Hurling Leagues and one fixture this Wednesday in the football league. For results of all games and forthcoming fixtures please check https://tipperary.gaa.ie/fixtures-results/

The 60 x 30 season has started with the Inter-Club Competitions. In the open team event, Ballina, comprising of Ger Coonan, Declan Gleeson, Noel Moroney and David Hickey, (pictured below) had a good win over Broadford in Limerick in the semi-final and later went on to defeat another Limerick club, Hospital, in the final by 90-41.

In the Junior B club competition Silvermines are up against Hospital from Limerick in Thurles this Tuesday night in the Munster semi-final. 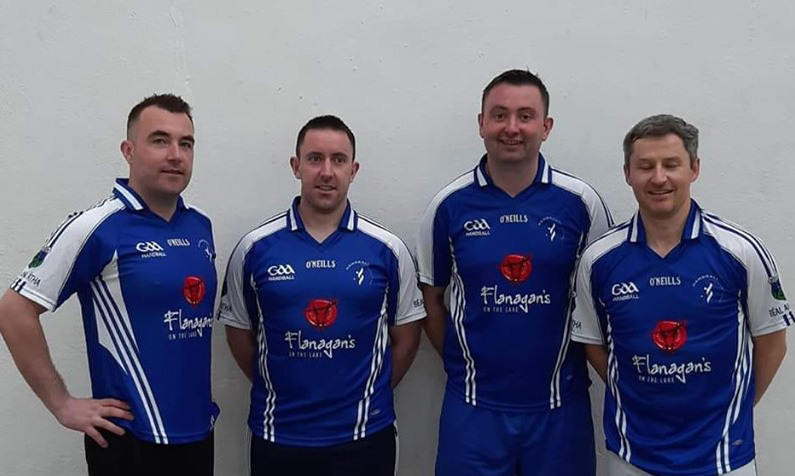 The South Tipperary GAA Board was founded on Sunday 8 June 1907 and all are welcome to attend this celebration. 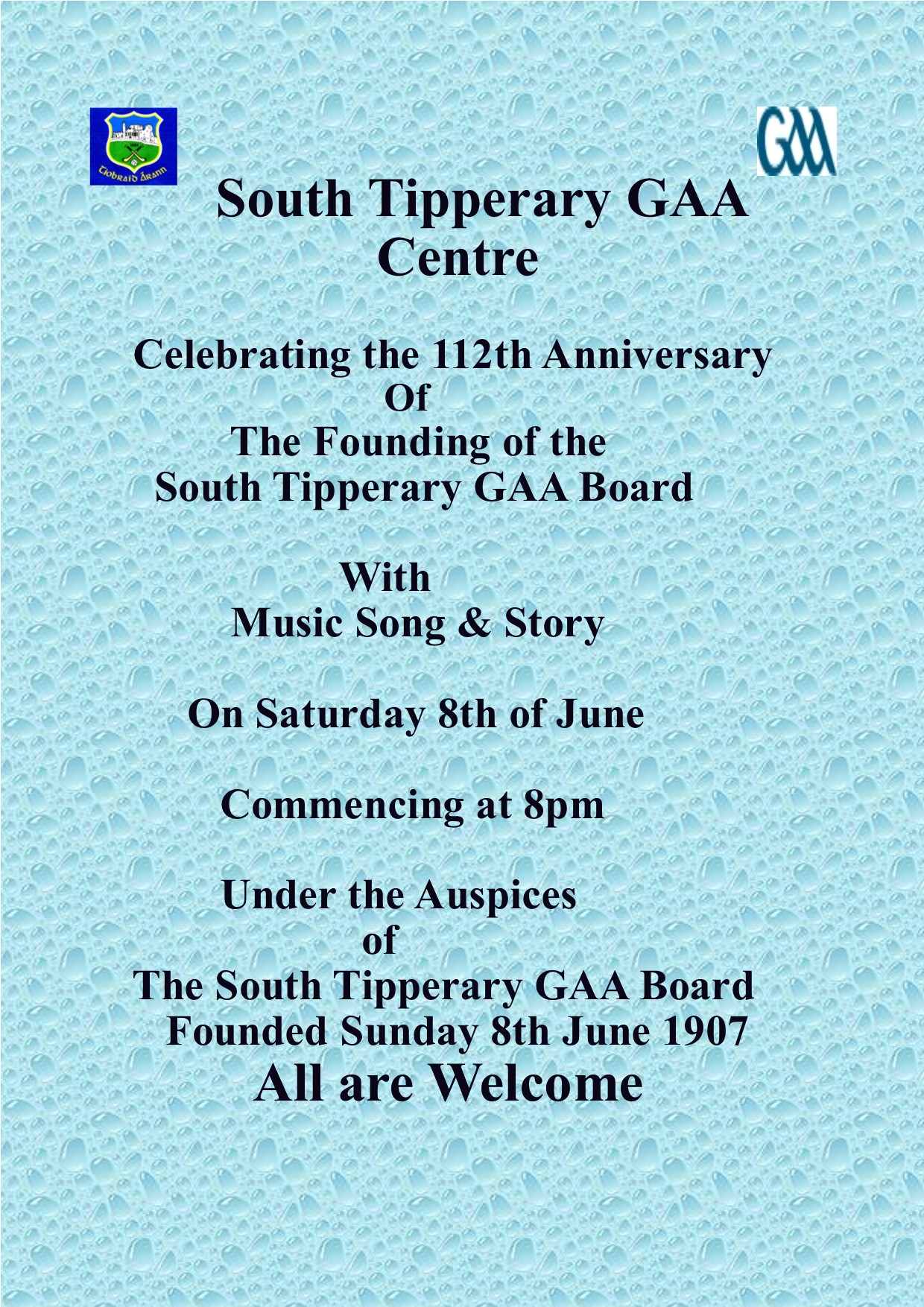 We offer our sympathies to Enda O’Sullivan, PRO Tipperary Football Committee and the O’Sullivan and Maher families following the death of his sister Sinéad. Sympathies also to the Aherlow and Eire Óg Annacarty GAA Clubs on the deaths of Gerard Moroney and Sean Breen. May they Rest in Peace.

GAA clubs the length and breadth of the country know only too well that fundraising is crucial in keeping clubs going. Whatever size club, the GAA is the lifeblood of many local communities and funds are an essential part. Whether your club needs to purchase new jerseys, or your changing rooms could do with a fresh coat of paint, or better still, a brand-new clubhouse! Whatever the project, fundraising is a staple to maintaining any club and its grounds.

Tipperary GAA and Tipp Classical are delighted to have partnered for this unique fundraising initiative where clubs have the opportunity to raise valuable funds and potentially a windfall of up to €250,000. For every Tipp Classical Festival Ticket, you sell to your loyal club supporters 100% of that discount value goes back to your GAA club.

Last year’s festival brought an estimated €12 million boost to the local economy. With an expanded 2-day festival this year it will be an even bigger offering as it will cater up to 30,000 fans in Semple Stadium. Beyond the stadium, the fantastic FMC Music Trail of Liberty Square expands to include more venues throughout the town. Thurles will play host to some iconic and legendary performers as they descend onto the grounds of Semple.

The process couldn’t be simpler as all ticketing will be managed by our festival partners www.eventbrite.com Each club in the county will have their own unique web address to direct their supporters to purchase tickets to Tipp Classical Festival, 21st & 22nd September, Semple Stadium.

The initiative will run for a 6-week period and kicked off on May 14th last.

A percentage of each Tipp Classical ticket purchased this way will raise funds for your local club. Visit the festival website https://tippclassical.com/ to see the line-up of artists on each of the festival dates.

Children are coached in hurling, camogie, football and ladies’ football and some camps offer rounders, handball and fun & run.

The week-long Kellogg’s GAA Cúl Camps are priced at €60, dropping to €55 for a second child and just €45 or a third and any additional children.

Everyone who registers for a Kellogg’s GAA Cúl Camp can enter a competition for a chance to win €5,000 worth of training gear for their team and a €500 voucher for themselves by entering the code from promotional packs of Kellogg’s Corn Flakes or Rice Krispies in store from April or answering a question online. Register online now – gaa.ie/kelloggsculcamps

Ahead of Tipp’s next Munster Senior Hurling Championship match supporters can join the Tipperary Supporters Club at www.tippsupportersclub.com or by calling Jim Reidy, Membership Officer on 086 3580718.

All members are entered into a prize draw for championship match tickets for all Tipperary Senior games.
A specially designed Tipperary Supporters Club pen with stylus for use on touch-screen devices
2019 Car Sticker
Text alerts for all Championship team news
Regular news to your email about all the latest in Tipperary GAA circles

Membership for the Friends of Tipperary Football for 2019 is now available and costs only €20. There are some great prizes to be won throughout the year by becoming a member. The Friends are a fantastic group that help with the development of Tipperary Football. To join please go to www.friendsoftipperaryfootball.com

If you wish to include any item of interest in future articles, please e-mail at [email protected] on or before 3.00pm on Monday. Visit the Tipperary GAA web site at http://tipperary.gaa.ie to keep up to date with all the latest news in Tipperary GAA circles.

Tipperary v Down – Football Qualifier Round 1